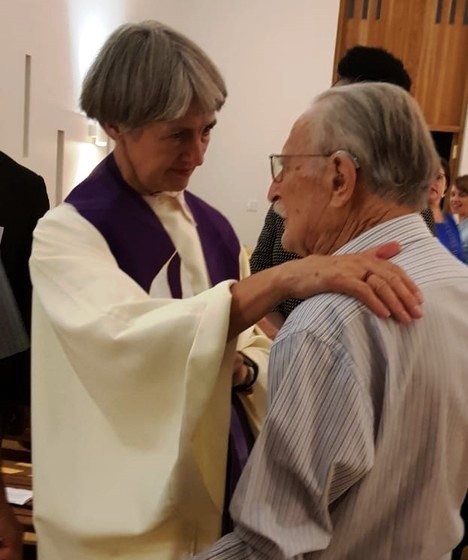 Photo: Elna Mouton with Rev. Dawid Botha (94) whose father was one of the pioneer missionaries among the Tiv people in Nigeria in (1911 and following years). The Reformed Theological Seminary (RTS) Mkar is a NetACT member representing the Church of Christ in the Sudan Among the Tiv (NKST) [Nongo u Kristu u ken Sudan hen Tiv].

NetACT has been invited and welcomed at the opening ceremony of the Andrew Murray Centre of Spirituality in Wellington, South Africa. Several NetACT members from SA, Nigeria, Malawi and Zimbabwe took part in the two-day opening conference (25-26 February 2019) with the theme “Rooted in Christ: Stay in me like I in you.”..

The project, launched in May 2017, has the vision of developing and promoting a missional spirituality that builds on Andrew Murray’s life and work from the Reformed identity of the Dutch Reformed Church, but also in the broader reformed tradition and theology. NetACT was invited to use the facilities for sabbaticals or writers retreats. The centre has 33 rooms and everything that is needed for spiritual retreats, sabbaticals and writing assignments of groups that need a place with a strong spiritual impact where they can work and engage.

Prof Elna Mouton, a NetACT Board Member for many years, accepted the role of spiritual advisor and chapel liturgist at the Andrew Murray Centre for Spirituality. She admits that one reason why she accepted the call was because the AMCS was from the very beginning designed to be open to all NetACT members who need a place to stay and work. Prof Mouton played a key role in some of the books that NetACT published on gender (http://netact.christians.co.za/books-articles/ ).