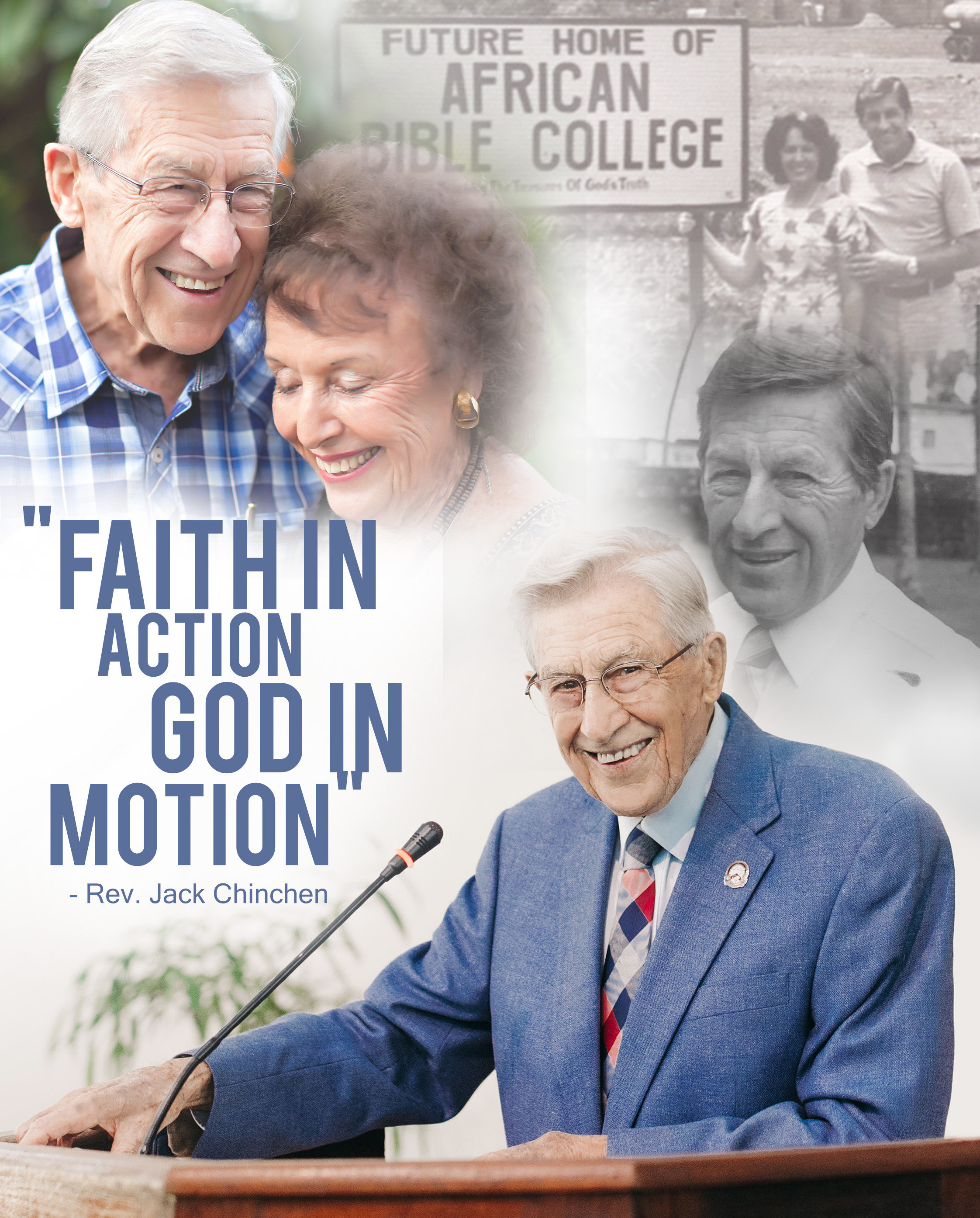 Rev. Dr. John (Jack) William  Chinchen, Founder of African Bible Colleges (http://africanbiblecolleges.com/), went to be with our Lord and Savior on Tuesday, February 26, at 6:40 pm at the age of 94.  Dr. Chinchen died in Africa, where he served Christ for nearly 50 years as a pioneer missionary and one of the continent’s great trailblazers of Christian higher education.

Dr. Chinchen is survived by his wife, Nell Barksdale Robertson Chinchen of Jackson, Mississippi, who co-founded Christian colleges and universities with Jack in Liberia (1976), Malawi (1989) and Uganda (2005) – and their seven children – Bill, Vann, Del, Lisa, Paul, Palmer and Marion Sue.  Jack has 39 grandchildren and 40 great grandchildren – along with, as Christ promised in Mark 10, tens of thousands of children who came to know and love God as a result of his 50 years of service in Africa from 1970-2019.

Jack Chinchen was born on June 30, 1924, in Detroit, Michigan.  He was the first born of Arthur and Beth Chinchen and grandson of John D. Crummy, founder of FMC. Jack grew up in San Jose, California, with his brother Stanley, who is now 90.

In 1944, at the height of WWII, Jack enlisted in the US Navy.  He was sent to Colombia University in New York and North Dakota for officer’s Training School, then on to Gulfport, Mississippi for training as a Recognition Officer. In Gulfport he met his Southern Belle, Nell Robertson. On November 5, 1945, Jack and Nell were married in San Jose, California. Jack was commissioned as a Lieutenant JG and assigned to a Destroyer, the USS Maddox, which fought in the Pacific theatre during the war.

After the war Jack and Nell returned to California where he graduated from San Jose State University with a degree in Business in 1946. For the next ten years he managed their family’s pear orchards in the Santa Clara Valley.  On his 33rd birthday Nell gave Jack his first Bible and he fell in love with Jesus Christ. Two years later he dedicated his life to full-time Christian service and enrolled at San Francisco Theological Seminary where he graduated with a Master of Divinity in 1962.  Upon graduation he was ordained as a Presbyterian minister and was called to his first church in Clallam Bay, Washington, where he pastored from 1962-1965.

In 1969 a Liberia evangelist, Augustus B. Marwieh, invited Jack and Nell to come to Liberia to train village pastors. in January, 1970, Jack and Nell, along with four of their seven children moved to ENI Mission in the jungles of Sinoe County, Liberia. The Chinchen’s first home in Africa was constructed from bamboo mats and on stilts.  During Jacks’s seven years at the mission he built fourteen buildings and cut a six mile road through the bush. Jack also initiated one of the first short-term mission trip programs, which he named “Vacangelize” (vacation and evangelization). During their time at ENI Mission the Chinchens lost two homes to fires, loosing practically everything they owned.

While under an Indian almond tree on the Atlantic in Baffu Bay, Liberia, where he had established the Vacangelize program God gave Jack a vision for Christian colleges in Africa.  Jack’s goal was to provide in Africa the same caliber of higher Christian education that was traditionally only available abroad.  The Chinchen’s modeled the colleges after Moody and Columbia Bible College, with the goal of making the education relevant to the African context while keeping God’s word at the center of all instruction and activities of the institution.

In 1978, with the motto, “Faith in Action – God in Motion”, the first African Bible College was opened in Yekepa, Liberia. It would be the country’s first 4-year Christian university.

Ten years later the Chinchens established a second African Bible College campus in Malawi, where it was again the first 4-year Christian college in the country.  Today the Malawi campus encompass a number of important support ministries including the ABC Christian Academy, the ABC Mission Hospital, Radio ABC and ABC-TV.

Jack and Nell have established four ABC radio stations in Africa, one each in Liberia and Uganda, two in Malawi (Lilongwe and Mzuzu), as well as a Christian television station that operates from the ABC campus in Malawi.

Jack has always loved teaching and preaching God’s Word.  He taught many Bible and Theology courses at African Bible College over the years, but his great love was teaching through the Book of Joshua and teaching his students how to preach.  Jack had a great passion for helping others discover the promises, hope and salvation through Christ found in scripture.  His passion for God’s Word is reflected in the motto inscribe on the front gate of all three college campuses, Teaching the Treasures of God’s Truth.

Dr. Chinchen was awarded an Honorary Doctorate (LL.D) from Biola University in 1992 for his pioneering work in Christian higher education in Africa.

Isiah 18 gave Jack the firm belief that Africa had a great destiny. He looked forward to the Lord’s coming again and believed Africa would be God’s final stronghold for Christ upon His returns.