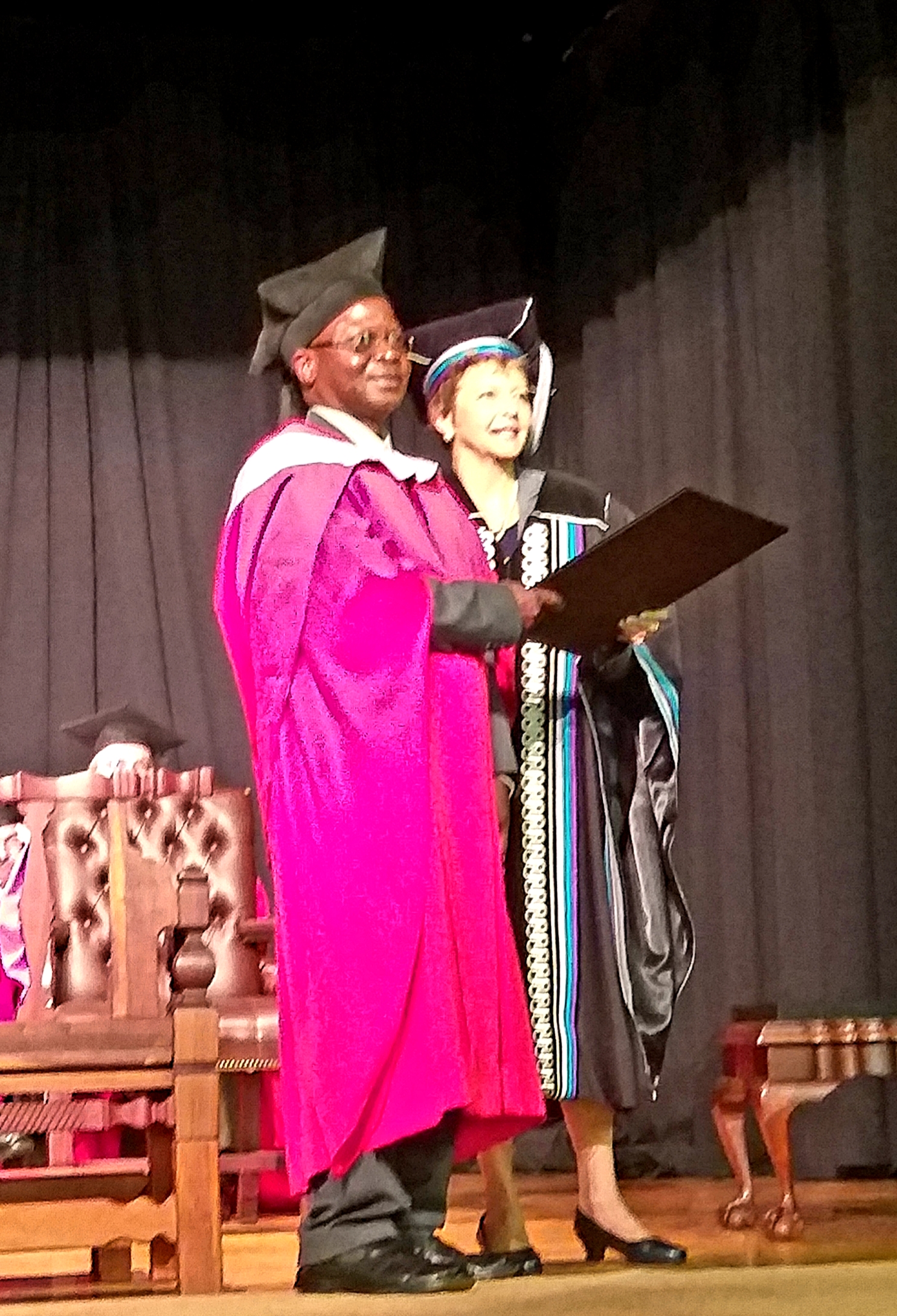 Reverend Manasse Matiquele, the Rector of HEFSIBA, Institute for Christian Higher Education (ICHE) in Mozambique (http://bit.ly/2Wx4gwh), received his Doctorate in Theology from the North West University in Potchefstroom on Friday 24th of May 2019.

This was a historic moment as it was the first pastor from the Reformed Church in Mozambique to receive a Doctorate in Theology. Dr Petria Theron from the NWU and who had been missionary for many years in Mozambique, served as his promoter. She also welcomed him on the stage in the Portuguese language. Dr Kruger du Preez, for many years the Academic Dean of HEFSIBA and his wife Antoinette, the Administrator of HEFSIBA, now living in Bloemfontein, also attended this special occasion.

Manasse Fulassitala Matiquele was born on the 7th of March 1967 in Angónia, Mozambique. He obtained his Diploma in Agriculture (1992) and his BA in Theology (1997) at HEFSIBA ICHE in Mozambique. He completed his Honours degree in Pastoral Studies (2004) and his MA in Theology (2009) at Stellenbosch University. He expressed his sincere thanks for the loyal support received from the Witness Committee of the DRC in the Western Cape and from NetACT under the then initiative of Prof. Dr Jurgens Hendriks during his studies at the US.

Manasse started his working career as an agricultural adviser and shortly after that enrolled for theological training in order to become a pastor in the Igreja Reformada em Moçambique (IRM) in 1997. In 2001 he was called to become a full-time lecturer at HEFSIBA Theological College at Vila Ulónguè, in the northern part of Mozambique. HEFSIBA was founded by missionaries of the Dutch Reformed Church from South Africa. Especially the late Rev. Pieter Botha and Dr Manie Taute, now missionary in Portugal, played major roles in the establishing of this institution.

For his doctoral studies Dr Manasse received a bursary from the NWU and was financially supported by especially believers from the DRC churches in Kemptonpark.

Since 2004 Manasse has been Rector of HEFSIBA and he is married to Olina. In his thesis, Marriage counselling to pastors in the Igreja Reformada em Moçambique: a practical-theological study, pastor Manasse developed a biblical marriage counselling programme to show how the quality of the marriages of the pastors in the IRM may be improved. He identified six issues which may cause conflict in pastors’ marital relationships. These issues are related to sex, the influence of culture, childlessness, submission of wives, money and the status of pastors. One of the examiners remarked that he did exceptionally well as he managed to address topics which are not often openly talked about within the culture where the research was done. It is also clear that this study made an important contribution to Practical Theological research and is much needed in the church for Africa as a whole, since it addresses cultural issues. The biblical marriage counselling programme which Pastor Matiquele has developed need not to be limited only to the pastors in the IRM, but can be applied to church members in general in order for them to grow in their marital relationships.

It would be useful if money could be made available to translate this dissertation in Portuguese to be published in book form.